The grand plan for the future of the art industry in the next three years envisaged and proposed by Chairperson Oliver Chang.

The reelection of the 15th Chairperson, Board of Directors and Supervisors of the Taiwan Art Gallery Association (hereinafter the TAGA)[1] has been successfully completed last month, and Mr. Oliver Chang of Chuan Cheng Art Center was reelected as the Chairperson. In an afternoon of January, the TAGA hosted the first media tea reception in the INDIGO Hotel, which has a strong sense of stylish design, in Neihu. The Chairperson Oliver Chang, who returned to the TAGA, chatted cheerfully and wittily with the media reporters with his usual humorous charm in the tea reception. In addition to answering the questions, he also talked about his perspective of the next three years.

A scene of joint media interview: In the middle: Chairperson Oliver Chang, on the left: Secretary-General Wenmei Yiu

—————————————–
[1] Taiwan Art Gallery Association （TAGA） is the prominent gallery alliance in Taiwan, currently constituted by 124 domestic gallery members. Since its establishment on June 8, 1992, the mission of TAGA is to advocate visual art and culture within Taiwan and leading the globalization of Taiwan’s art industry. The main business of TAGA includes three: Gallery Member Services, Art Fairs Organization and Art Economy Research. Through the business, TAGA devotes to maintaining partnerships and increasing common benefits of galleries, leading the major art fairs in Taiwan including ART TAIPEI, ART TAICHUNG and ART TAINAN, as well as providing industry insights with professional research reports.

Following the financial turmoil in 2008, the world in 2020 still faces the ongoing challenge of the century. Major industries around the world have been severely affected by the coronavirus pandemic, and many important museums in Europe and the United States are also encountering the dilemma of closing and layoffs. By contrast, due to the government’s preventive measures in advance in Taiwan, all major industries can continue to develop and enjoy outstanding performances. According to the statistics provided by the Ministry of Finance, as of December 15, 2020, the amount of investment by the Taiwanese businessmen who returned to Taiwan reached 225.7 billion NTD. In addition, as reported by the “Business Weekly”, 250,000 Taiwanese returning from overseas accounted for 1% of the total population of Taiwan from January to October, 2020. Even though the art industry has been challenged by the severe pandemic, it still operates smoothly and has achieved good results. The pandemic has even further prompted the return of funds and returned talents from overseas, creating various opportunities. Taking ART TAIPEI last year as an example, an endless stream of funds was invested and brilliant results were accomplished. 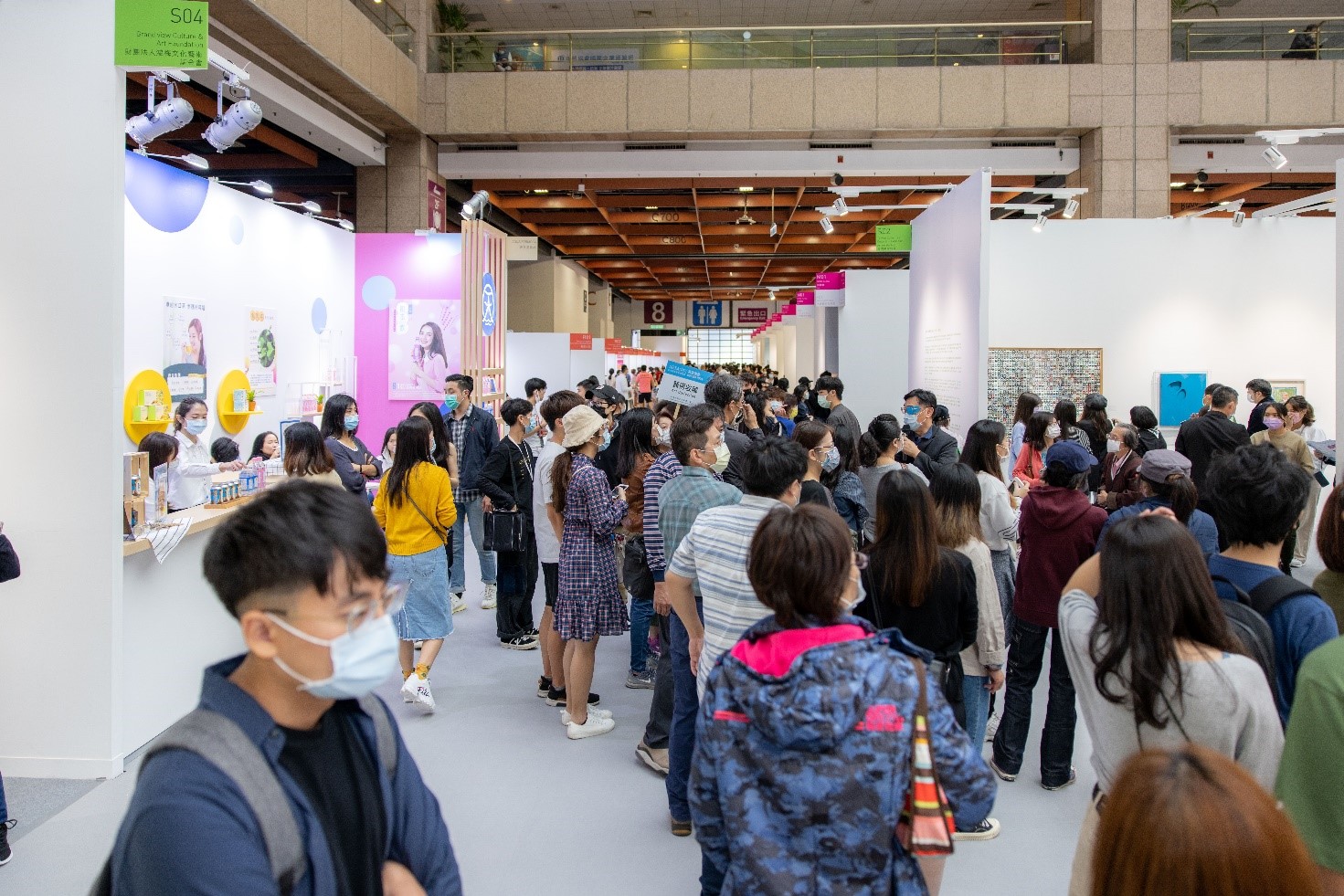 Tremendous amount of visitors participated in the 2020 ART TAIPEI.

Looking through the list of the Board of Directors and Supervisors, one of the highlights is the participation of the second generation of new members from galleries. The second-generation members of galleries this year accounted for 40% of the total, which is a significant increase of 10% from the average in the past five years. They took over and made the average age 8 years younger than the 14th board of the TAGA! The first action after taking office by the Chairperson Oliver Chang, who took over as the Chairperson of the TAGA for the second time, was to build internal consensus. There were eight second-generation members of galleries joining in this year’s consensus camp,[2] which was rare in the past. In fact, Mr. Chang, who actively promotes the younger generation of his team, strongly invited the second-generation members of major galleries to actively participate during the election. This move has also successfully reversed the traditional impression of the TAGA for many years. Mr. Chang humorously stated in the tea reception that he is the oldest among the current Directors and Supervisors, and the vitality and vigor brought by the younger team is very exciting.

A group photo of the consensus camp held on 5th and 6th, January, 2020: actively promoting the younger generation of the Board of Directors and Supervisors of the TAGA.

—————————————–
[2] Consensus camp is 2-days conference participated by the new-elected chairperson and board members of TAGA to discuss about business directions and execution improvements. It is held after each re-election.

In addition to internal integration, in response to changes in the external environment, Oliver Chang’s challenge after taking office is how to confront the uncertainty in the “post-pandemic period.” It cannot be denied that the situation of the pandemic in Taiwan is relatively mild and stable compared to overseas. Nevertheless, it is still necessary to be cautious in participating in economic activities. Accordingly, this year’s overseas visit plans are all temporarily suspended, and the main focus is to strengthen dialogue and exchanges with senior domestic galleries. Furthermore, the phased task of “academic first, market second” advocated in the past has also come to an end. In the future, market visibility will be enhanced. Further to the “industry, government, academia, and collection”, the top priority will be “parallel development in academia and market”, and the TAGA will continue to plan to visit government departments for communication and exchange. Recently, the TAGA invited representatives of the visual art industry to explain the regulations of the “Culture and Arts Reward Act”[3] to the KMT Party Caucus of the Legislative Yuan.[4] Moreover, with respect to the industry, government, academia, and collection, scholars have been invited to discuss the institutionalization of the authentication and appraisal system, the history of the gallery industry, the art tax environment, and the industrial policy of expansion of the international market in mid-January.

The TAGA invited representatives of the visual art industry to explain the regulations of the “Culture and Arts Reward Act” to the KMT Party Caucus of the Legislative Yuan on January 11, 2020.

In a rapidly changing era, the key tasks of the TAGA in the next three years will be divided into three stages: In 2021, to consolidate industrial strength and enhance corporate purchases; in 2022, to expand overseas markets and head towards 30 years of glorious achievement; and in 2023, to integrate visions throughout generations, and hold the 30th ART TAIPEI. This year is an important year to lay a solid foundation, mainly by integrating the resources of the domestic visual art industry and establishing the three pillars of the TAGA, including strengthening the exchanges of collectors’ associations and the interaction of overseas collector groups, as well as the exchange and sharing of resources of the Asia-Pacific Art Gallery Associations (APAGA),[5] and increasing cooperation with foreign institutions in Taiwan; and in this way, the visibility of corporate acquisitions will be enhanced by consolidating the consensus of domestic entrepreneurs, the new generation of art collectors and professional art collections so as to serve as the strength and foundation of the overseas expansion plan in 2022. In 2022, the TAGA will take art as diplomacy, and radiate from Asia as the center to connect Northeast Asia, Southeast Asia, and China’s art industries to establish an a longitudinal line of Asian visual art industry. In 2023, the new generation will speak for the industry to strive for common rights and accelerate the overall development of the industry, such as fighting for rights for artists and pushing reform of the art auction tax system. The art industry will blossom and bear fruit in 2023 after three years of quenching and refinement. Through two generations of endeavors, it will bring about a comprehensive upgrade for the art industry and pulsate with the global art economy market. 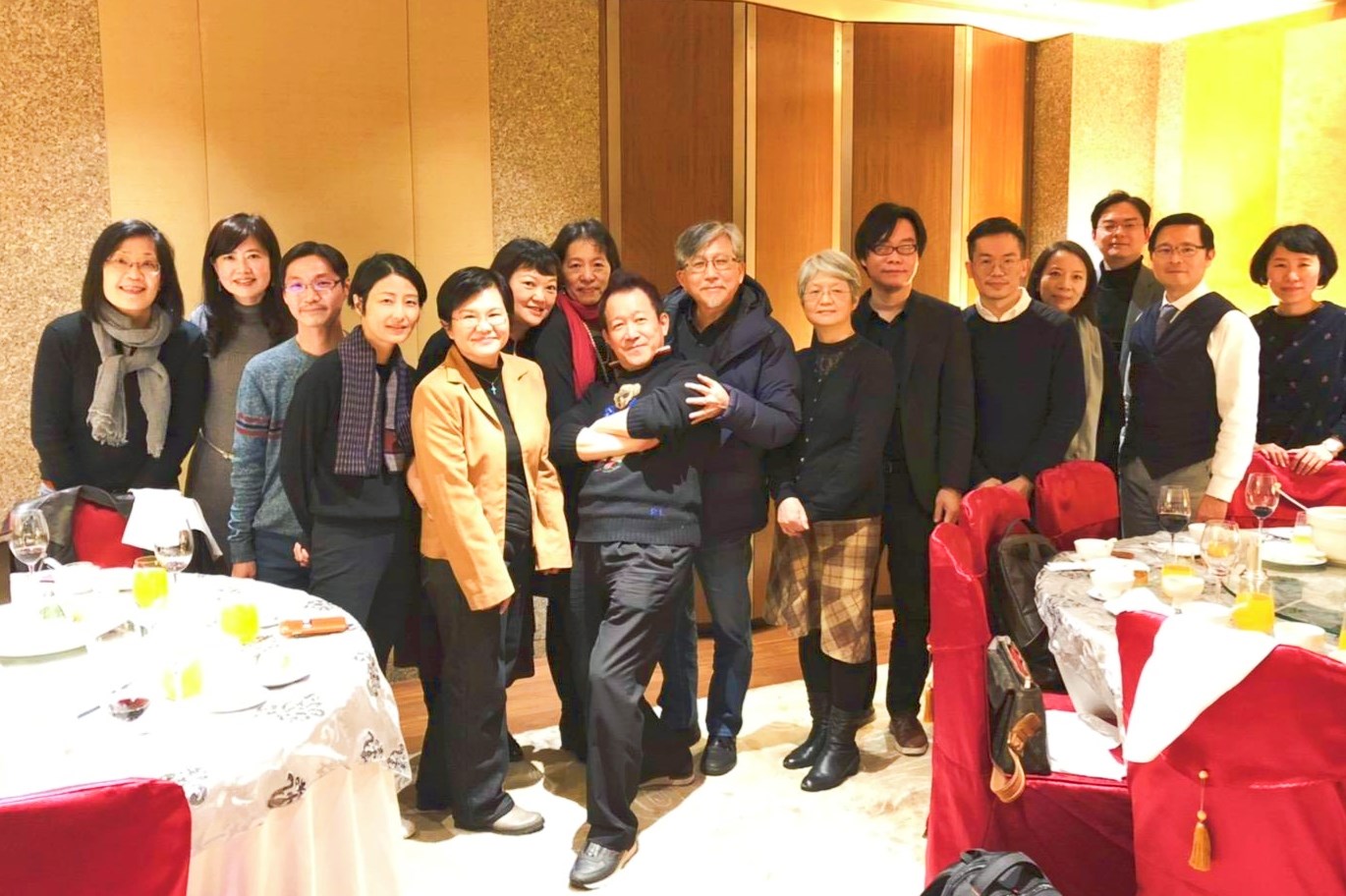 The TAGA invited experts and scholars in the art field to exchange opinions regarding authentication and appraisal systems, art tax environment, expansion of the international art market and other topics.

This is the second time for Oliver Chang to serve as the Chairperson of the TAGA. There was no running-in period after Mr. Chang took office. In less than a month, he had led a team to visit major galleries and art institutions in northern and southern Taiwan without stopping. The visits started from the southern Taiwan, including galleries such as the J.P. Art Center, check en 19, Taiwan ARTCCI Co., Ltd., the Lotus Art Gallery, the Fine Art Center, and BABISONG Gallery.

Oliver Chang, the Chairperson of the TAGA, and Wenmei Yiu, the Secretary-General, visited the members in the southern Taiwan to exchange their ideas and thoughts on the local art and cultural en-vironment.

The first art fair to be held by the TAGA in 2021 is the ART TAINAN which will be launched in March. After mid-January, Oliver Chang actively connected 6 major art venues, including the Kaohsiung Museum of Fine Arts, the Tainan Art Museum, the National Tainan Living Art center, the Chimei Museum, the Pingtung Art Museum, and the Taitung Art Museum, to create the “Southern Intermuseum Alliance” and enrich the dimensions of the museum’s cooperation in the ART TAINAN. The ART TAINAN has a deep connection with Mr. Chang. In addition to being a native of Tainan, he changed the original Fu-Cheng Art Fair into the ART TAINAN when he was the Chairperson of the 11th board of the TAGA. Different from the ART TAIPEI in the form of presentation board, the ART TAINAN attracts many people interested in art with a unique form of small yet beautiful scale, affordable price, and exhibition in a hotel. The ART TAINAN is the best cradle for novice art collectors.

Renamed “ART TAINAN” for the first time in 2013

Oliver Chang, who values “inheritance” and “harmonic people relations”, made the team alive with drastic measures. With delicate integration, he built a team that can fight against obstacles in a rapidly changing period which requires the power of actions. What kind of outlook will be shown under the leadership of Mr. Chang in the next three years is so exciting to look forward to!

In EP5, Mr. Eric Chen, known as the "Prince of Exhibition" in the art industry of Taiwan, introduces the short story of Imavision Gallery to everyone and invites the artist Wu Chih of the exhibition "Electrocardiogram of Soul" to give a tour of his creative context and artistic creation process.

More Follow
This error message is only visible to WordPress admins

There has been a problem with your Instagram Feed.